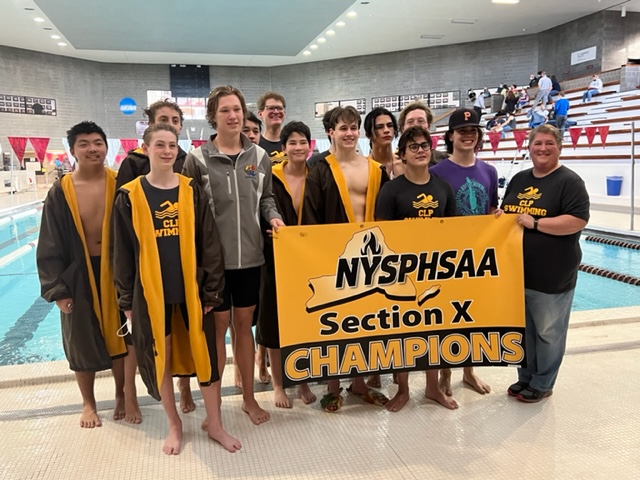 The boys swim team entered the Sectionals Championships with excellent success against their Section 10 foes.  But, at the championships, they must defeat both teams from Section VII and Section X to claim victory.  On paper, it looked like the top three teams were going to be fighting it out with a slight edge given to AuSable Valley and their depth.  However, the boys from Canton, Potsdam, and Madrid-Waddington had other ideas.  In just their fourth year, the CLP Boys Swim team scored 311 points to swim off as champions.

Swimming at Maxcy Hall at SUNY Potsdam, it was an exciting meet from start to finish. In the first race of the day, the 200 medley relay of Mark Hollinger, Trevor Bates, Alex Baxter, and Juan Paul Corona Gomez dropped 3 seconds from their seed time, taking second place by just .73 seconds.  In the 200 freestyle, Baxter swam a season best of 2:06.07 to take second while Adam Sabatini and Matt Tupper also finished in the top 8.

The 200 IM saw the run of seconds continue with Juan Pablo Corona Gomez taking second in a season best time of 2:16.75.  Alex Butler rounded out the scoring for the CLP boys team in this event with a solid 5th place finish.  The 50 freestyle showed the depth of the CLP squad, as 4 swimmers finished in the top ten.  The squad was led by Luis Rodriguez Gomez who out-touched the competition from AuSable Valley to win the 50 with a time of 24.78.  With this victory Rodriguez Gomez qualified for the NYSPHSAA State Championships.  Mark Hollinger, Daniel Armendariz-Huang, and Eric Choi rounded out the scoring for the boys.  Choi then came back in the next race, the 100 butterfly, to take third.  Both athletes in this race had personal best times with Choi dropping 5 seconds and Alex Butler (5th place) dropping an impressive 11 seconds in his swim.

The 100 freestyle was, once again, a testament to the depth of the CLP squad.  The boys took first (Rodriguez Guerrero), third (Baxter), fifth (Bates), and tenth (Lucas Watts). With the first 6 events finished, CLP was holding onto a slim lead over the Plattsburgh and AuSable Valley teams.  The next race, the 500 free, was the longest race of the day and was decided by the smallest of margins, just .3 seconds.  JP Corona Gomez and Patrick Hagadorn from AuSable Valley swam neck and neck for five minutes.  They turned at the wall with a 50 to go, dead-even to the 100th.  They both pushed and drove their legs to push themselves.  In the end, it was a victory for Hagadorn, as Corona Gomez finished a close second.  Daniel Armendariz-Huang was just back from the leaders as he took third with a time of 6:10.34.

The 200 relay squad of Hollinger, Baxter, Rodriguez Guerrero, and Corona Gomez dropped 7 seconds to finish third with a time of 1:38.96 – less than a second back from the winners.  In the 200 backstroke, CLP went 2,3,4 as Hollinger, Sabitini, and Matt Tupper swam smart and fast races.  In his final race for CLP, senior Trevor Bates swam a personal best 1:12.74 to take fourth, while Watts swam to a 7th place finish in the 100 Breastroke.  In the final race of the day, with the championship in hand, Sabatini, Choi, Armendariz-Huang, and Rodriguez Guerrero took 3rd in the 400 free relay.

Overall, the team swam very well as many athletes had season or personal best times!  It was a team effort to come away with the 2022 Section VI/X Championship!