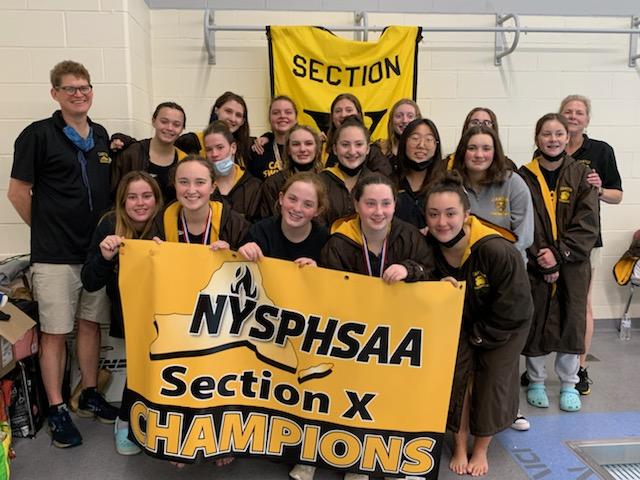 The Lady Bears of Canton went into the Sectional meet on 11.7 looking to extend their undefeated season.  When the waves settled at the end of the meet, the Bears walked away victorious once again.  Earning a total of 296 points, Canton opened a gap of 83 points on the runner-up squad from St. Lawrence Central.  This victory was a team effort and highlighted the depth of the swimming program in Canton.  Qualifying a league best 11 swimmers, they were able to score athletes in many events, outpacing the competition.

It was an exciting meet from start to finish as many members of the team put down season best times to finish their 2021 campaigns.  To start the meet off, the 200 Medley Relay, the squad of Stuntz, Redfern, Thomas, and Alguire dropped 2.5 seconds from their previous season best time and finished a close .10 seconds behind SLC for second place.  In the 200 freestyle, senior Olivia Logan took third with a time of 2:18.13 while Maddie Mitchell and Maralisa Salvi-Miquel also finished in the top 8.  The Canton depth showed in the 200 Individual Medley when the Bears took 1, 4, 5, and 7th.  Lexi Stuntz earned her first victory of the meet in a winning time of 2:29.21.  Senior Mia Mousaw closed out her swimming career with a strong 5th place finish in the event.  In the 50 freestyle, 8th grader Tessa Alguire took a solid 5th place.

The 100 fly saw Carmen Mussen doubling up on her 7th place finish in the IM, again taking 7th.  Maya Thomas swam a season best 1:09.31 in the fly to take second place, earning Second-Team All-Northern.  The 100 freestyle was the first Section X championship competition for Kaitlyn Redfern as she finished a solid 5th in her first sectionals.

And then the depth of Canton really started to open a gap on the competition.  In the 500, 9th grader Skyler Sanderson fought off a challenger from Gouverneur to win in a time of 6:04.61.  With this victory, Skyler qualified for the NYSPHSAA State Championships.   Also in the 500 freestyle, Maya Thomas took 3rd, Maralisa Salvi-Miquel 4th, and Junior Maddie Mitchell took 7th.  The second place 200 Free Relay of Tessa Alguire, Lexi Stuntz, Maya Thomas, and Kaitlyn Redfern dropped an impressive 5 seconds from their previous season best finishing in 1:52.32.

Stuntz and Alguire then came back in the next event to go 1-2 in the 100 back.  Lexi Stuntz won the event with a season best 1:08.16 and also qualified for the NYSPHSAA State Championships.  Baylee Wilson dropped a personal best time of 1:16.56 and finished 5th in the 100 Back.   In the final individual event of the day, Kaitlyn Redfern took second place in the 100 Breaststroke with a 1:18.12 just .09 seconds back from the winner.  Senior Olivia Logan showed her versatility with a 5th place finish with a time of 1:24.23.  In the final race of the day, the 400 freestyle relay, the team of Olivia Logan, Skyler Sanderson, Maralisa Salvi-Miquel, and Maddie Mitchell took 4th with a strong 1:04.39 anchor leg from Maddie.

Overall, the team swam very well and came away with the 2021 Section X Championship!